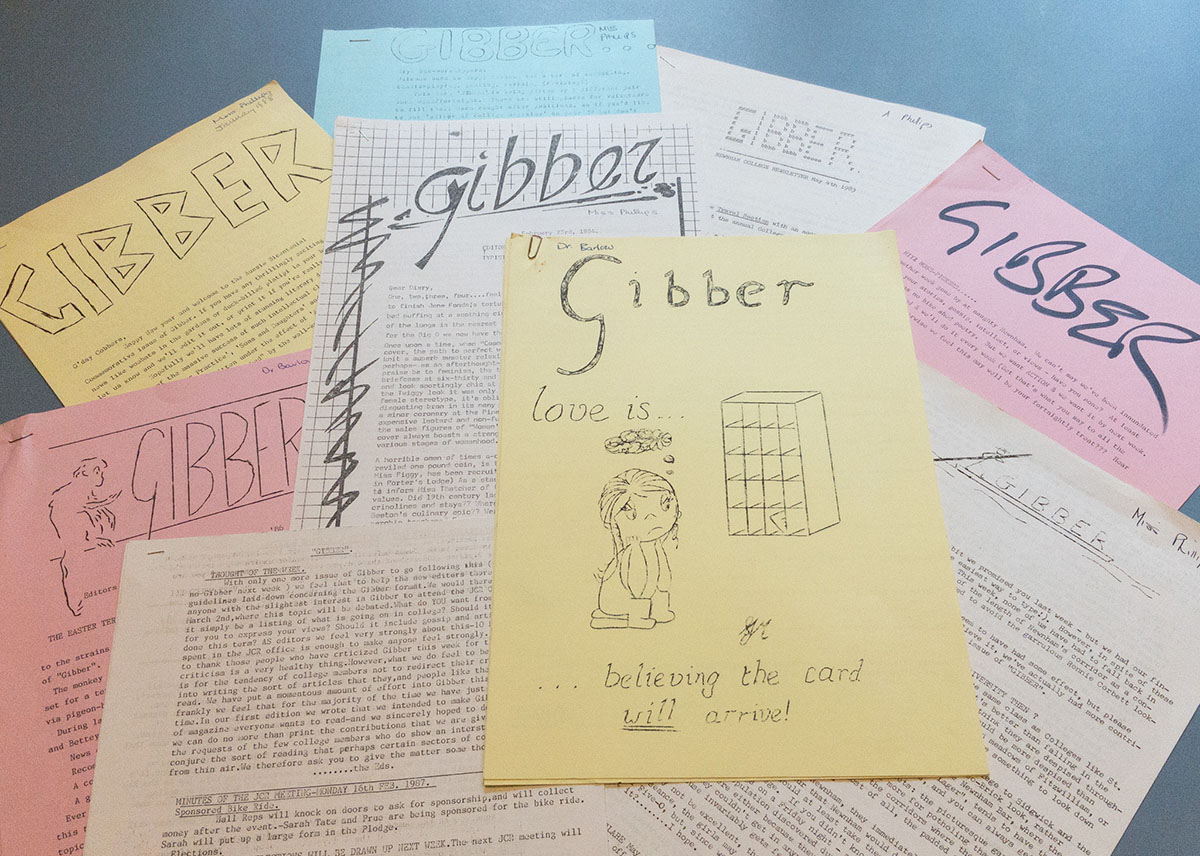 Newnham’s student produced magazines provide a fascinating peek into the everyday life of college, where serious political debate stands alongside gossip. These magazines reveal the way that daily college life was always negotiating, and inflected with, the political.

Thersities was a student magazine produced throughout 1909-1938. Mostly, it discussed the politics and intricacies of college life. Initially, it came out four times a term; and later was termly. Thersities is a figure in Greek mythology. Homer’s Iliad mentions him as a soldier fighting in the Trojan War, describing him as ‘odious and course, harsh-voiced and irrepressible.‘

The editors of Newnham’s Thersites explain their choice of name in the paper’s first edition: ‘You will wonder with horror what led us to blight the infancy of our journal with such a name…For all the grossness of the picture we bear away it from the conviction that Thersites advice was sound, his judgement unimpeachable…at last we bring him before the world in his true colours.’[1]

Newnham’s Thersites encouraged contributions in letter form of all of Newnham’s student body. These were often satirical and described the intricacies of college life in relatable ways: ‘Of course it is the best possible manners for friends invariably to sit together at meals, but must they entirely ignore anyone else who is unfortunate enough to come to the same table?’[2]

Another writer contemplated Newnham’s image to the outside world: ‘It seems that Newnham appears to the world in general and to the undergraduate in particular in one of two lights… on the one hand the majority…regard Newnham, with awe as a kind of Convent school of the strictest sort. A gloomy abode of narrow cells and severe lecture-rooms, where no relaxation is allowed…a place of sorrow and continual toil.’ The other view, which the author felt was ‘worse’, was that Newnham students partied too much, and had far too much fun in college. 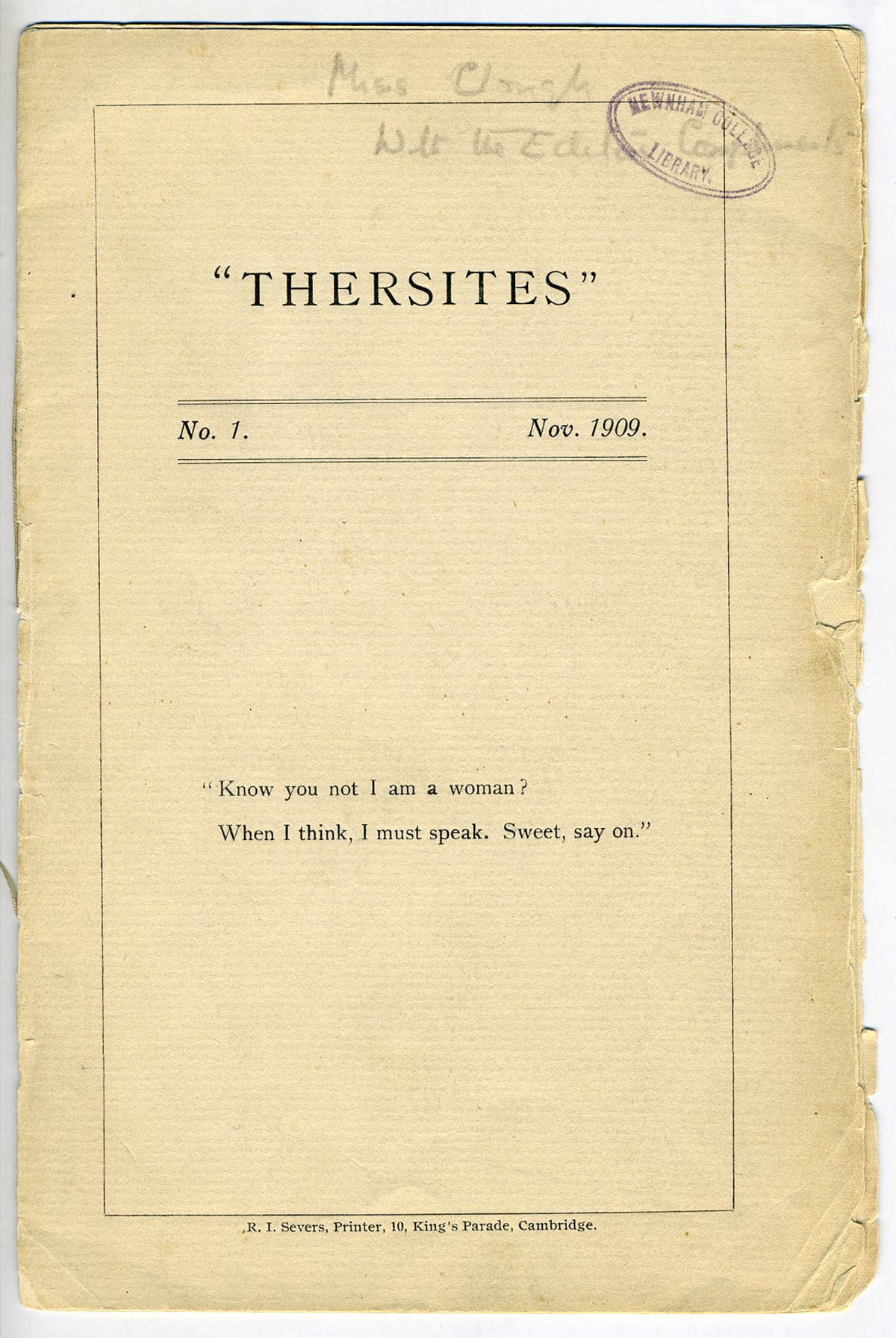 Political aspects of college life featured across the pages of Thersites. It celebrated the founding of Newnham College suffrage society and the outcomes of the Newnham College Debating Society. Occasionally, global politics is covered too. In 1938, Thersites last year of production, Helen Gillet wrote of the importance of Aid for Spain during the Spanish civil war (1936-1939) where nationalists staged a coup against the democratically elected Republican government. While Spanish nationalists were supported by Fascist Germany and Italy, Britain continued to recognise the Republican government, but followed an official policy of non-intervention. Gillet wrote: ‘Whatever our personal opinions on whether non-intervention did or did not save European peace we must admit that the deprivation of arms [from Britain to Spain] has so hampered Spain that the war has been prolonged and that it is we who are mainly responsible for this. ’Gillet suggests that ‘it is up to do what we can to relieve the suffering of women and children.’

The students of Newnham hoped to raise £30, ‘a large sum for us’ though ‘not so good beside St. John’s [College] £100, but it is always difficult to collect much in women’s colleges, maybe because of less pocket money.’ Newnham students in support of Republican Spain thought it ‘a good idea to occasionally economise on food,’ and proposed that bread and cheese lunches might be provided for those who wanted’ with the difference in cost between a bread and cheese lunch and a hot lunch being sent to Spain.[3] 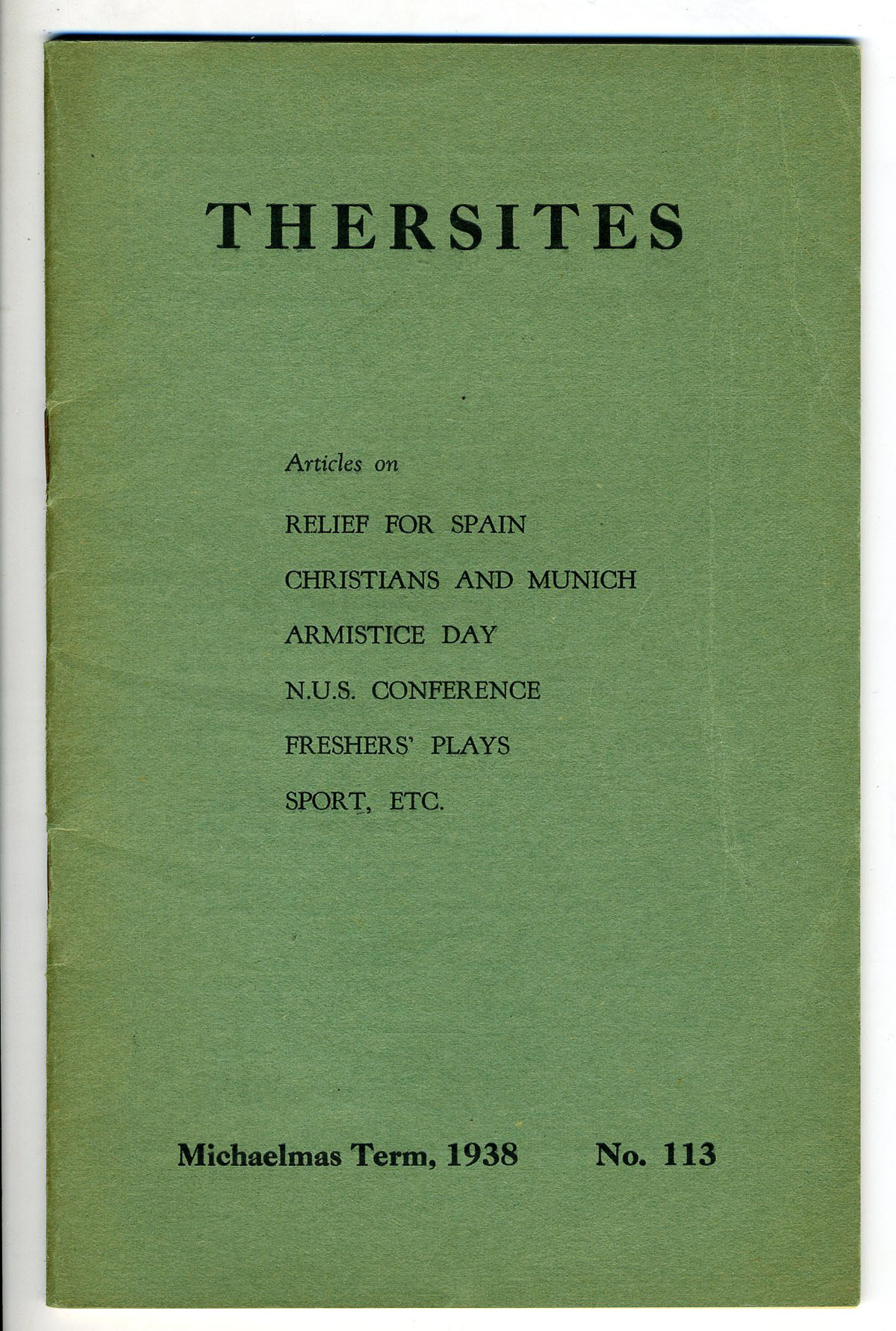 Gibber, sometimes bi-lined ‘Newnham College newsletter,’ was a typewritten and photocopied newsletter produced irregularly throughout the 1980s. It is funny, rude, sassy, and quite often political. A small editorial team of undergraduate students produced it, on rotation, and others were invited to contribute. The editors advise: ‘Get some vino available and sit down to pen some stuff to hit us hard by next week.’

Along with candid reviews of restaurants in Cambridge, and discussions about train times by the British Rail Liaison Officer who provided fare and timetable information in the days before Google, it also occasionally shows the negotiation of global politics within college. For example, the May 1983 edition informs readers that an emergency open meeting had been called to discuss a motion regarding Apartheid South Africa and the boycott of certain businesses. At this time, a global boycott of South African goods and businesses was taking place, but despite this Barclay’s remained tied to South Africa. “Newnham JCR proposes to send all Freshers information regarding Barclays’ banking links with South Africa, and to suggest that they open their accounts elsewhere.’ Student Helen Atwell wrote a letter following the meeting:

'I was totally devastated by the number of people voting against the motion to send information to Freshers on Barclay’s involvement in South Africa. The familiar pitiful cry “but what difference does it make to a big… bank such as Barclays if there is a lack in the number of meagre accounts opened by Newnham Freshers"… If Barclays is a big tree, then we are a small axe.’

Closer to home, Gibber reveals the negotiations of race at Newnham, by Black and women of colour students. One student wrote candidly of the experience she had when in conversation she would ‘come to recognize some unmistakable signs–the slight frown, the quizzical look, the puzzled smile–warnings of the unavoidable question to come…”Excuse me, but where do you come from?”  She also warned “fellow Newnhamites who may think that her East African home country was a forgotten haven where people live in another Eden” that this was “Not so…and economic survival has become an archaic term on the island.”

Gibber also reveals that Newnham women often faced sexist perceptions across the university. These included accusations that their college was second-rate because it was a women’s college, or they were ‘hordes of hungry feminists waiting to convert even those only tainted with chauvinism.’ In response, Gibber writes ‘Let me tell you, sir, that the girls of Newnham are on excellent terms with their male counterparts in Cambridge.

'When a distraught student wanders in from the barren wilderness of Pembroke or Magdalene’ - colleges which did not admit women students until 1984 and 1988 respectively- ‘and falls sobbing into our arms because his bedder forgot to tuck him in tight enough, we are glad to offer him comfort, tea and crumpets.’[4]