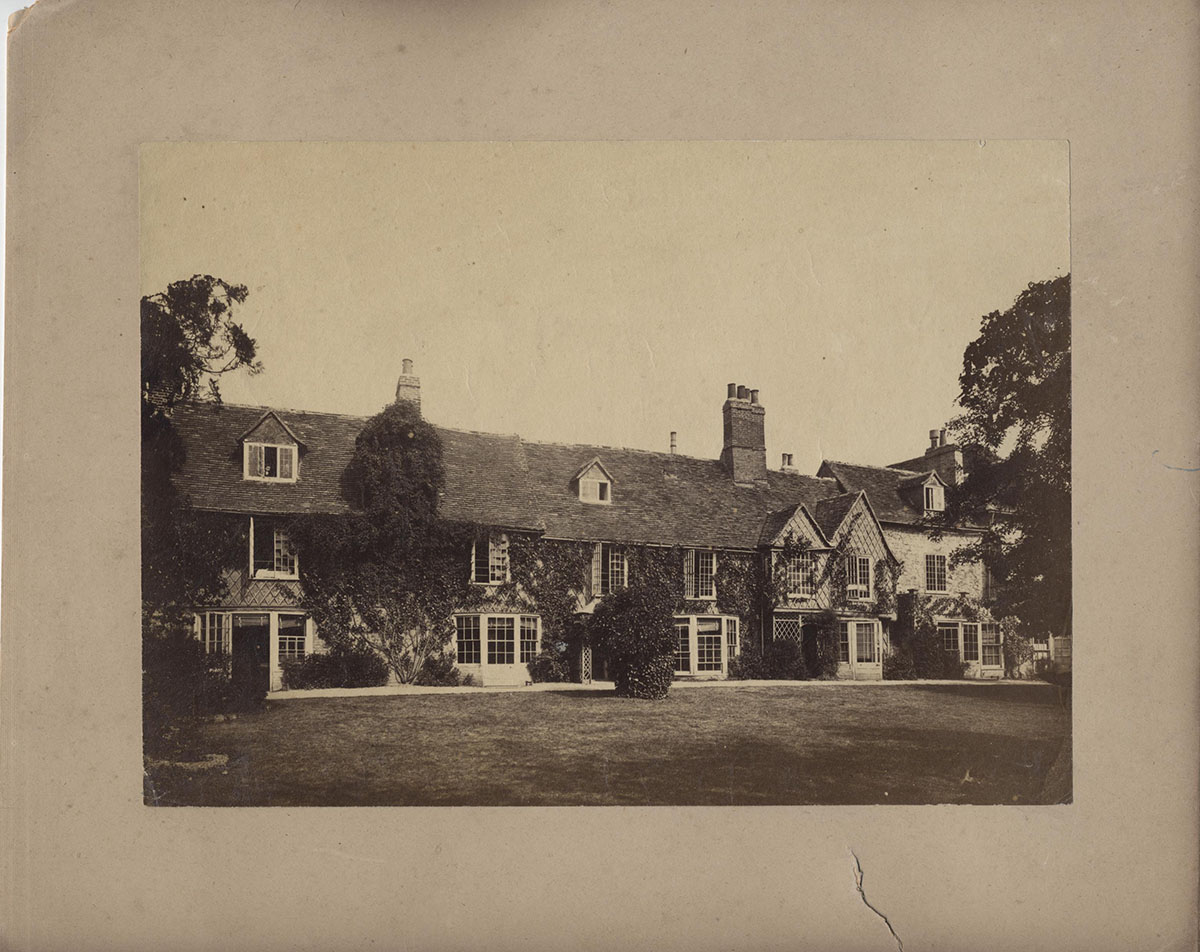 Barred from membership of the Cambridge Union until 1963, women students created vibrant debating societies within their colleges.

Debates began at Newnham sometime between 1872 and 1874, held first – as the founding myth goes – under the medlar tree in the garden of Merton Hall (see photos above and below), Newnham’s temporary home before the move to Sidgwick Avenue in 1875.

As the college site evolved, Newnham’s debaters transformed the College Hall into a hub for political discussion, debating such questions as the abolition of the House of Lords and the Disestablishment of the Church of England.

Debates encouraged students and staff to learn public speaking skills, think on their feet, and dissect current issues. At the same time, the society aimed to forge a collective identity among Newnhamites. College pride was put to the test in the prestigious annual inter-collegiate debate against Girton. 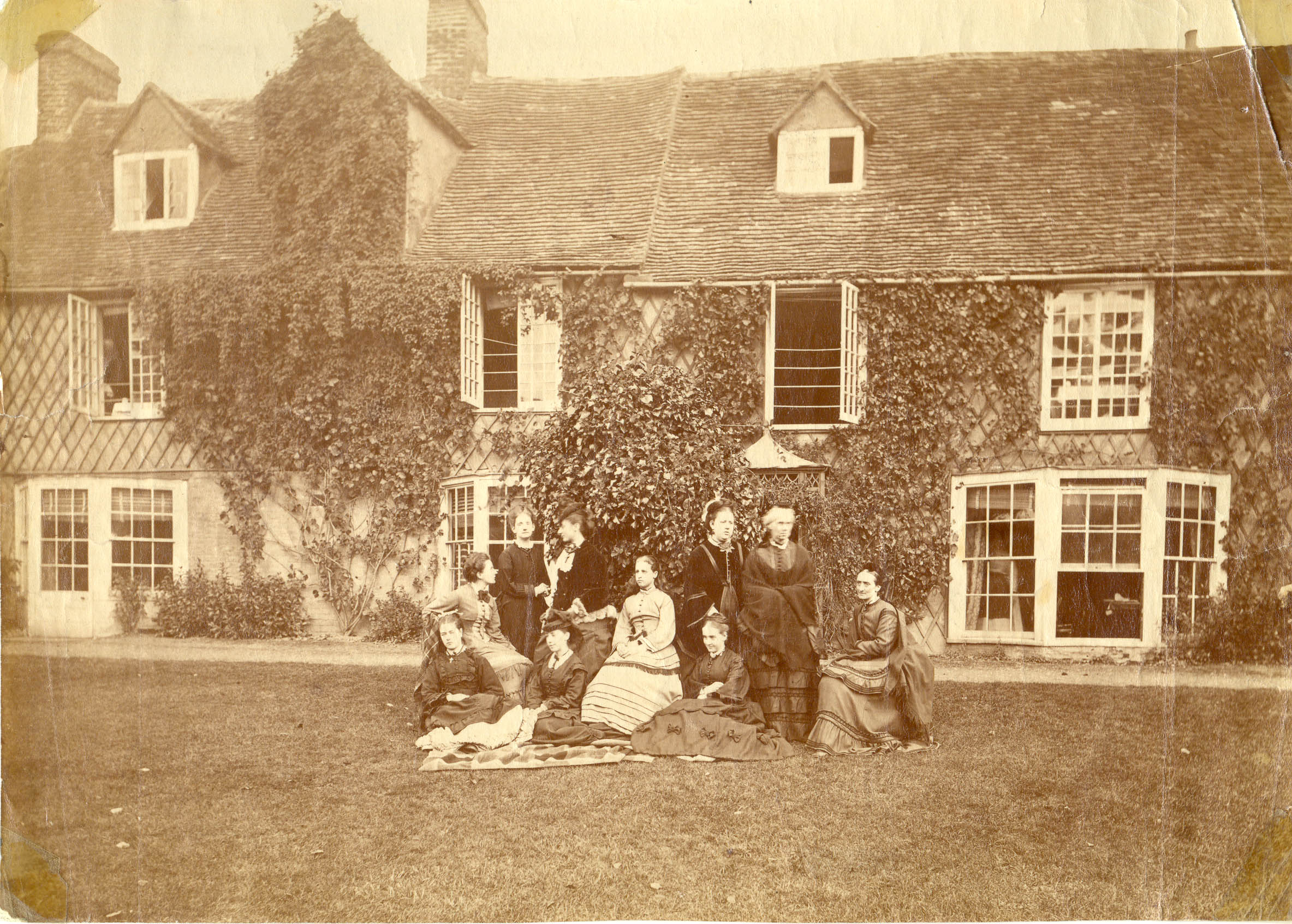 Philosophical questions were popular with debaters. Students also weighed in on proposed academic reforms. In 1900, they joined a long-running debate over whether compulsory Ancient Greek should remain part of the ‘Little-go’ exam taken for entry to the Tripos. This exposed a dilemma at the heart of the women’s education movement. Could women’s access to higher education be increased by removing the requirement for Ancient Greek – a staple in boys’ public schools – while continuing to challenge ongoing prejudice against women’s intellectual capabilities, like their ability to master the ‘male’ Classics?

Not all students took naturally to the debating chamber. Anxiety about speaking in public held many back. Historian Madeleine Dodds, who joined Newnham in 1904, wrote to her younger sister about the ‘perfectly awful’ experience of speaking in a debate. Freshers established their own debating society in 1912 to create a less intimidating environment for their first forays into public speaking.

While some debates were lacklustre, political controversies could be relied on to rally reluctant speakers. In 1907, as the suffragettes began their militant campaign, Newnham’s Debating Society addressed these new tactics. The College Letter reported on the ‘great occasion’ with triumph.

‘Hardly ever can the College Hall have been the scene of greater enthusiasm’.

This appetite for political debate was key to the success of a rival society. The Political Society – or ‘Poly’ as it was familiarly known – launched in 1884. As Alice Gardner explained in her Short History of Newnham College (1921), it ‘adopted all the forms of an imitation House of Commons, with Speaker, Government, Opposition, and the like.’ In place of elections, the government alternated between the then two major parties – Liberal and Conservative – each year.

Hugely popular, membership of the Political reached 152 in 1892. As historian Sarah Wiggins has pointed out, with only 149 students registered at the time, staff members must also have been keen participants. Decades before women could sit as MPs – a right granted by the 1918 Parliament (Representation of Women) Act – female students and academics honed their political skills in Newnham’s own House of Commons.

In 1898, bills debated in the ‘parliamentary sessions’ included amendments to the Game Laws, Irish local government reform, and the abolition of capital punishment. Colonialism often featured in debates. In 1905, members discussed the settlement of the Transvaal Constitution as well as whether Chinese indentured labour should have been imported to the region. Swept up in the popular excitement surrounding the Boer War of 1899 to 1902, the Poly even displayed a ‘notice board for war telegrams’ in the lecture-room corridor to allow its members to follow the latest news of the conflict’s progress. 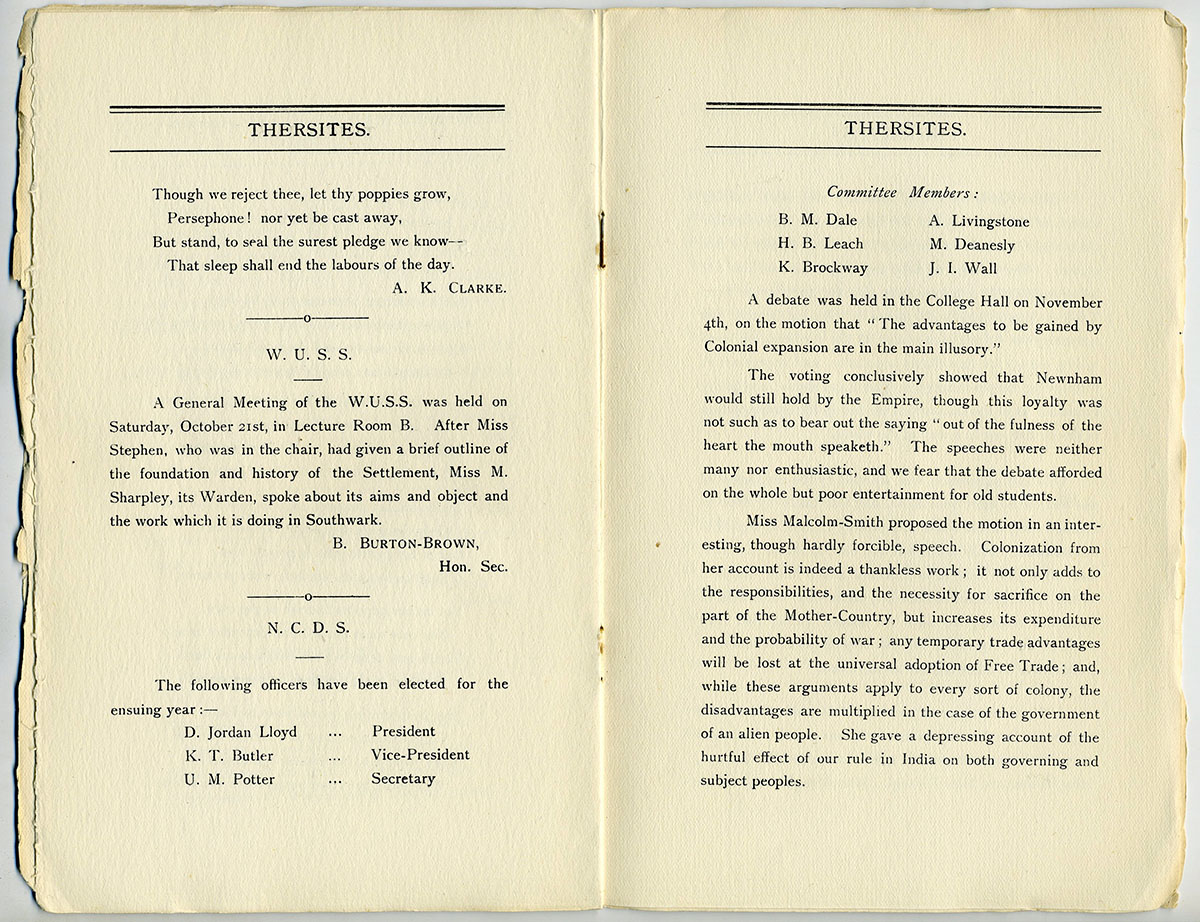 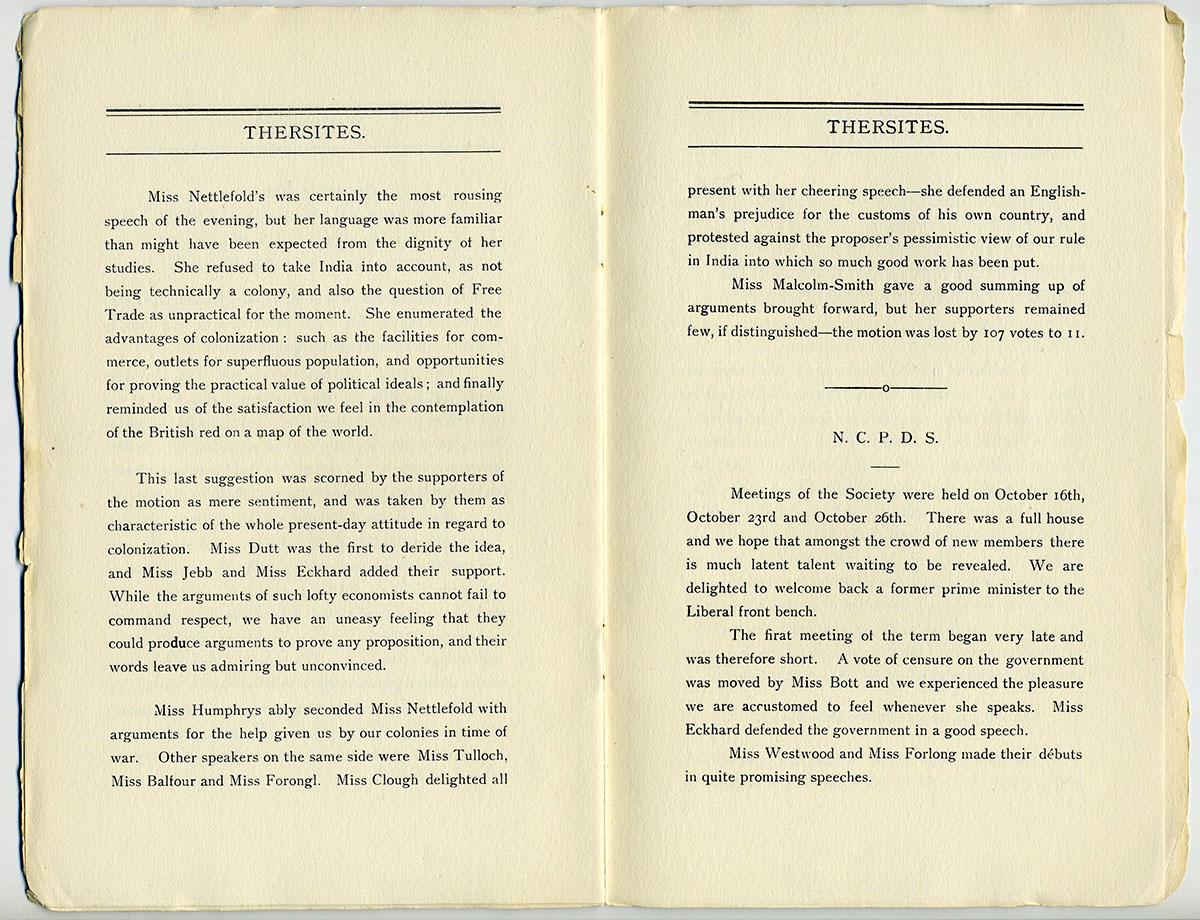 The British Empire also occupied members of the college’s Debating Society (see reports in Thersites above). As Britain waged colonial war in South Africa, debaters considered the merits of internationalism, questioning whether ‘the world is the best country to serve’. A decade later, debaters affirmed their imperial outlook. In November 1911, they voted by a huge majority of 96 against the motion that ‘The advantages to be gained by Colonial expansion are in the main illusory’. Opposers of the motion emphasised the trade, emigration, political, and military advantages of empire. Swayed too by the more emotional appeal of Edwardian high imperialism, Nancy Nettlefold closed her opposing speech by proclaiming ‘the satisfaction we feel in the contemplation of the British red on a map of the world’. An all too brief acknowledgement of the ‘hurtful effect of our rule in India on both governing and subject peoples’ was diluted by speakers’ focus on British sacrifice and the financial burden of empire. As the college magazine Thersites reported, the vote ‘conclusively showed that Newnham would still hold by the Empire’.

Supporters praised the Political Society for keeping students up to date on parliamentary affairs. The forum also introduced students to the combative atmosphere of the House of Commons. Success in the Political required mastering more rigorous rhetoric than in ordinary debates. In 1887, the College Letter described the different styles of the two clubs.

At the Political, ‘the speaking is less ceremonious … fiery denunciation of honourable members opposite, and ridicule of their policy and arguments are rather encouraged’.

This was familiar territory for students with a personal connection to parliamentary politics. According to Alice Gardner, fathers or friends in parliament occasionally ‘coached’ Newnham’s parliamentarians for their debates. The suffragist and Liberal politician Margery Corbett Ashby (1901) remembered how the Political Society was her ‘chief interest’ at Newnham. Her involvement followed naturally from her experiences supporting her father’s parliamentary election campaigns. Acting as Liberal Prime Minister of Newnham’s House of Commons may well have prepared Ashby for her own eventual victory in the 1944 Bury St Edmunds by-election. But political allegiances could change after university. First elected as a Labour MP in 1923, Susan Lawrence had once sat on the other side of the House, as Newnham’s Conservative premier.

The parliamentary trappings of the Political Society had its critics. In the summer of 1910, Thersites printed a vigorous exchange over the format of its debates. Responding to Eva Ward’s suggested reforms, magazine editor and Liberal Prime Minister Dorothy Lamb defended the society’s parliamentary set-up. She explained, ‘the [Poly] is fraught with a mass of intricate rules of procedure, which make it a far more difficult, but a far more amusing and exciting game than the [Debating Society], where rules are few, and few also the possibilities of error’. Despite Lamb’s efforts, the Poly abandoned its parliamentary form in 1912 and was disbanded a decade later.

Newnham’s parliamentary experiment captures a distinct moment where women’s educational possibilities outstripped their political representation. While Westminster’s doors remained closed, women students and academics made creative use of their own university spaces to fill the gap.

Dr Helen Sunderland is a historian of childhood, education and political culture in modern Britain. Her research focuses on the history of young people’s politics and she has published on schoolgirls’ debating societies in this period. She is currently a Stipendiary Lecturer in History at St Catherine’s College, Oxford.