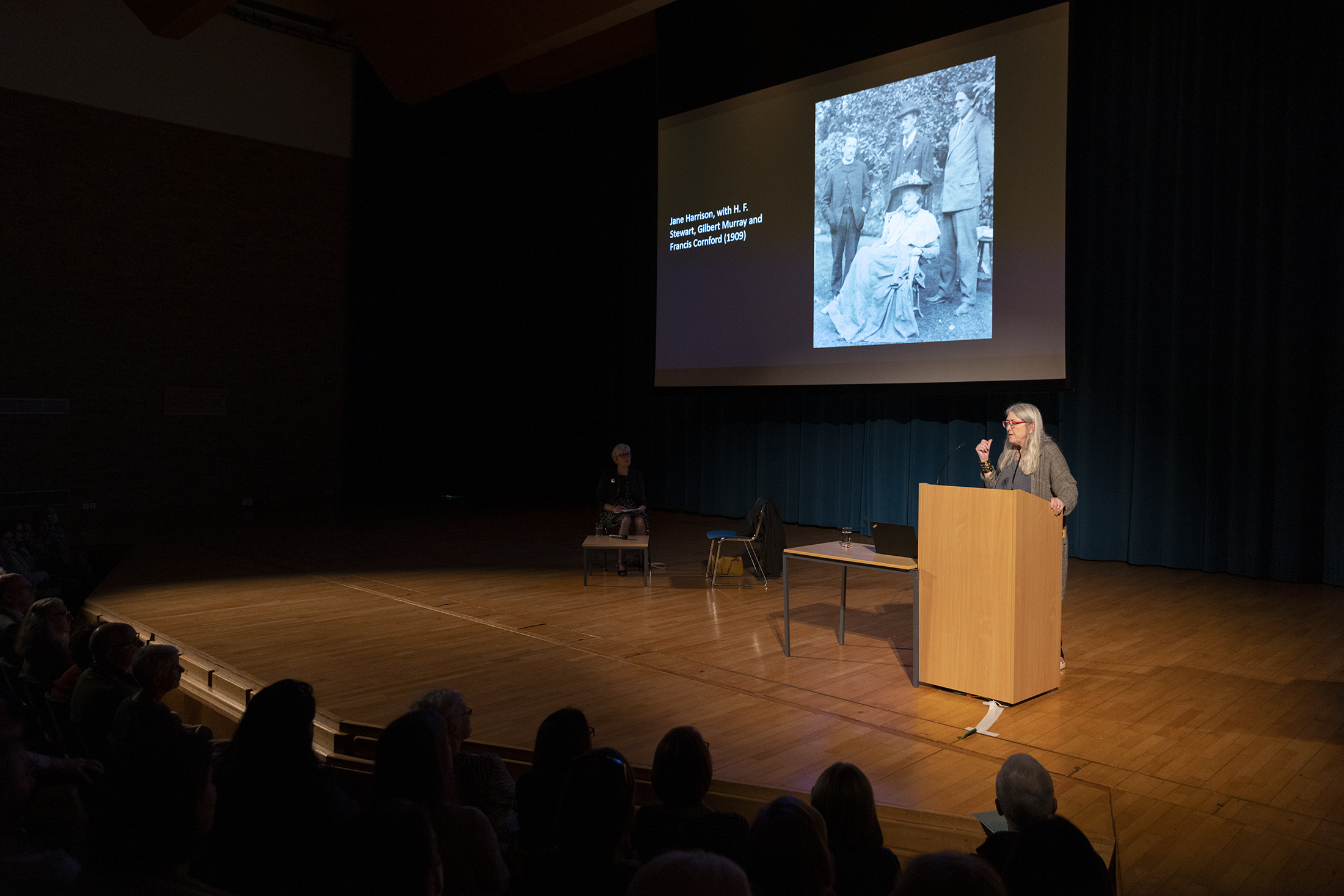 (Those who missed the talk can watch it and much more at Newnham’ Festival of Arts, Science and Ideas: free tickets are available to all)

Jane Ellen Harrison was a pioneering classicist (1850 – 1928), one of Mary Beard’s many distinguished predecessors at Newnham. In Mary’s own words, “She has become one of Newnham’s best symbols: one of its earliest students, a leading figure in revolutionizing the study of Greek religion (making it a lot messier, a lot less calm and rational) as well as being idiosyncratically glamourous and a bit bloody-minded.”

Over the years, Prof Mary Beard has brought her deep knowledge of classical culture to bear on today’s biggest questions, engaging with politics, contemporary culture and feminist issues. She is both a Fellow and an alumna of Newnham.

25 years ago, for Newnham’s 125th anniversary, Mary gave a first lecture on the topic of Jane Ellen Harrison, which became a book titled The Invention of Jane Harrison. For the 150th Anniversary Lecture, Mary’s focus was different. “Predictably enough, as I have got older, I have found myself being interested in a different part of Harrison’s career – now, at sixty-seven myself, thinking about Harrison’s departure from Newnham when she was just over seventy. I have become curious about (and slightly admirative of) her emphatic desire to make a break at that stage of her life and to move on to something new,” she wrote in her ‘Don’s life’ column for the TLS. As well as Jane Harrison’s life, the lecture explored what it means to be a female academic, and the ways in which Cambridge still has work to do in terms of diversifying.

Over 500 people attended, bringing together a mix of students, alumnae, Fellows, and many from beyond the University. “[The talk] was insightful, funny and in places irreverent. Everything that we love and expect from Professor Beard,” tweeted one visitor who had made the journey to Cambridge. After the talk, students and others queued enthusiastically to have books and leaflets signed, and to have their photo taken with the speaker.

Among the attendees were the Greek Deputy Minister of Labour and Social Affairs, a Newnham alumna with a particular interest in the College’s classics tradition.

This completed a series of four remarkable lectures, which opened in Feb 2021 with Prof Dame Ottoline Leyser (NC 1983) discussing the culture gap between the sciences and the humanities. Philosopher Prof Rae Langton followed with a lecture exploring of the role of free speech in modern democracies. October 2021 saw economic historian Prof Jane Humphries CBE uncovering the hidden history of women’s unpaid labour and the cost of living.

If you missed Mary’s lecture, catch up with this and much, much more at the College’s Festival of Arts, Science and Ideas, 2-3rd July 2022.

Book your free tickets for Newnham’ Festival of Arts, Science and Ideas


On Friday 27th May, Prof Mary Beard gave the final lecture in the college’s 150th Anniversary…