A two-page article in the Roll Letter of January 1921 by Newnham member Edith Neville started Newnham’s working women’s summer schools. Neville called on members and alumnae of the college to support the Workers Educational Association and Colleges for Working Women set up in London. Neville envisioned the creation of a similar college in Cambridge. 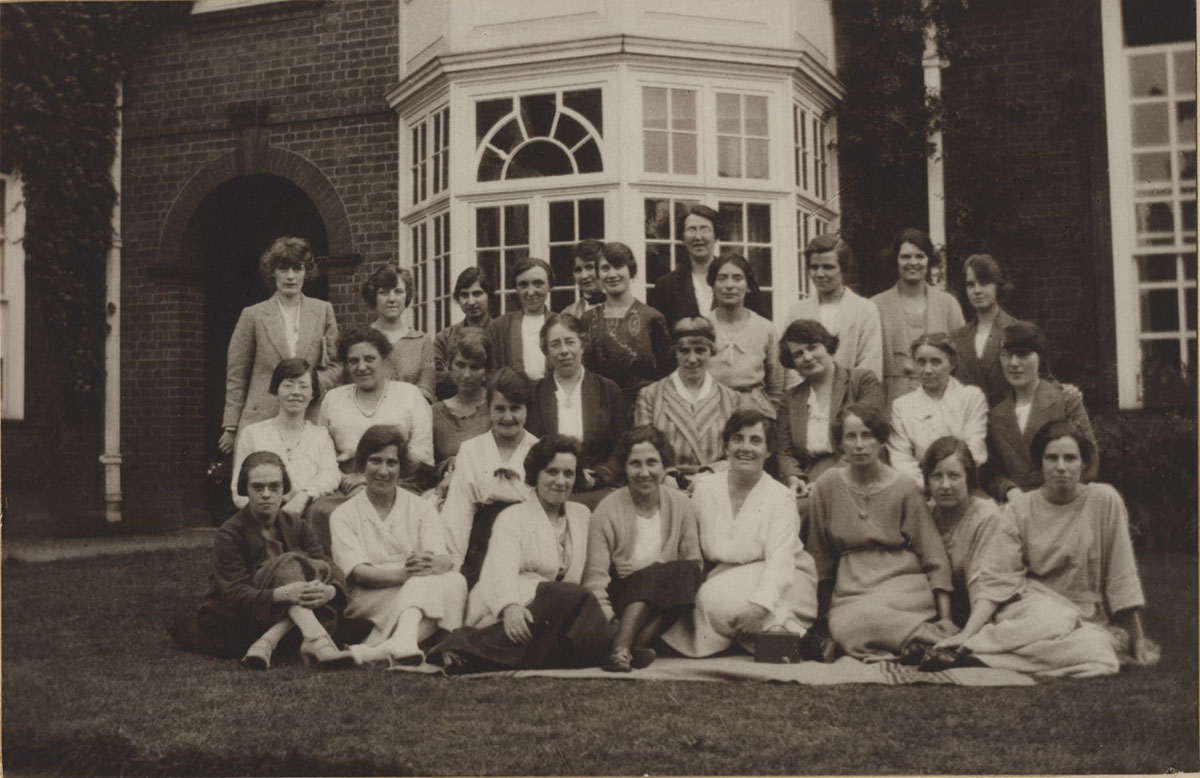 The aim of such colleges was to provide education “for the sake of true Learning and of true Art” to the poor (Roll Letter, Jan 1921, 44). The Workers’ Educational Association laid out their aims as quoted in Neville’s article: this was to be “‘an educational movement controlled by the working class, working in close co-operation with the best minds and best educational institutions of our time.’” The idea caught on: starting in 1922, every two years (with some irregularities during and after World War Two) Newnham hosted a fortnight-long summer course for working women during the long vacation, with the dates fixed so to best fall around typical factory holidays. Newnham’s summer schools were organised and taught by Cambridge academics at Newnham’s Fawcett building. Each course was open to 25 working women. Subjects were English, History, and Economics, later amended with Geography and Psychology, and bursaries were offered.

Why educate the working classes, and especially working women? Aside from giving working women a chance to discover the joys of intellectual exploration, courses such as Newnham’s enabled the modest ascent of individual women in social and economic rank: from unqualified worker to nurse, from shorthand typist to teacher. Enabling upward social mobility is the declared aim of Newnham’s summer schools in 1928:

“It is now our definite policy to make this summer school a starting place for those who have had little or no other opportunity of continuing their education and who are too diffident or too backward to join the more advanced classes of the larger summer schools. Those whom we admit are chiefly manual workers” (Newnham College Letter, Jan. 1928, 1-2).

This was different from other workers’ summer schools. At Oxford, male students founded Plebs Magazine and the Central Labour College, both with a clear revolutionary agenda and a determination to put education to that (and only that) use. At Bryn Mawr, Pennsylvania USA, an eight week course was set up for working women in 1921-38 with a close connection to unions and the labour movement, a revolutionary agenda, and a curriculum more instrumental to this end (see image below). At Bryn Mawr, students heard from the likes of W.E.B. Du Bois. 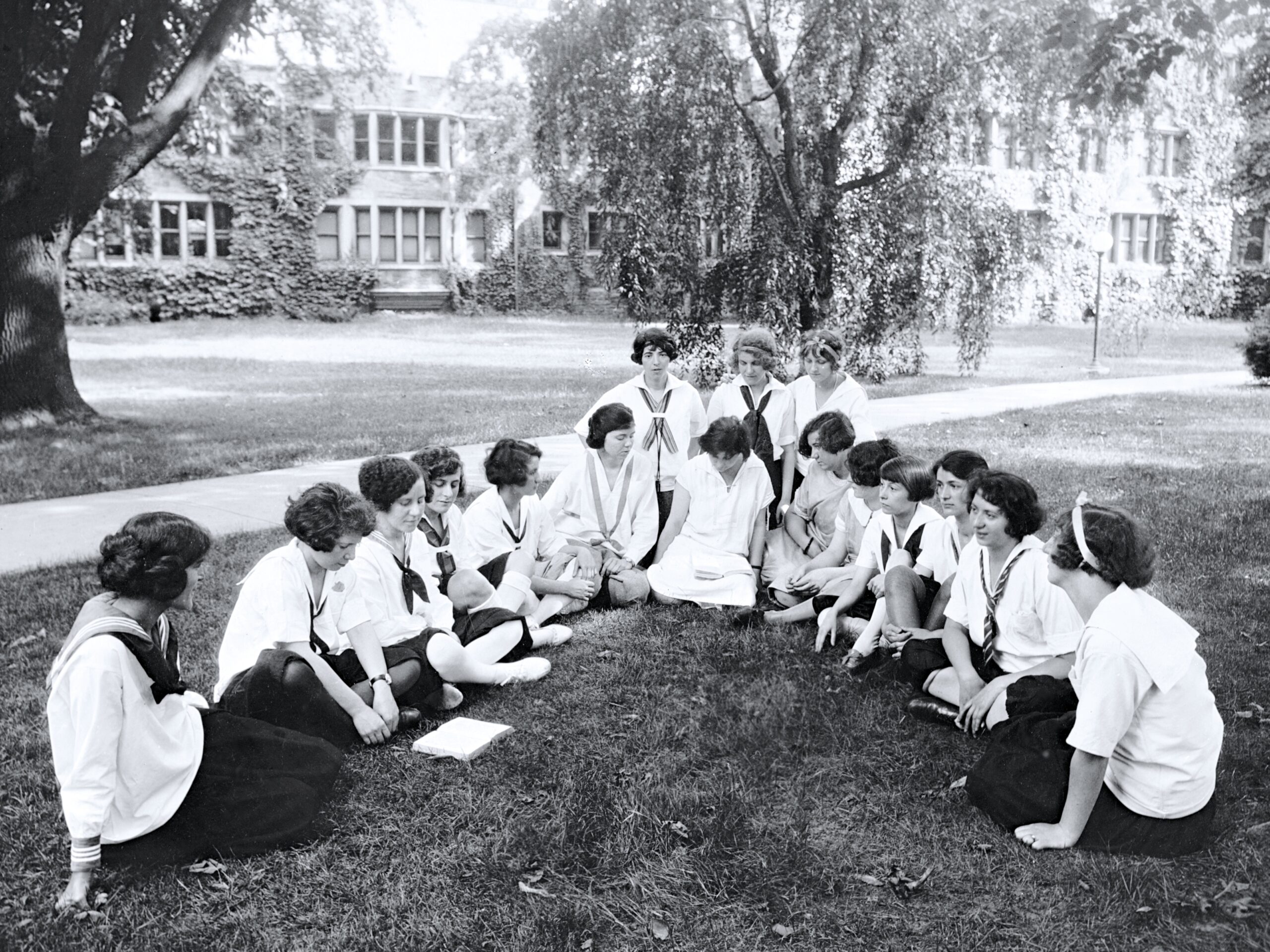 Two weeks of study at a Newnham summer school may seem too short to achieve any lasting change for its attendees. Yet, its programme was integrated into the Workers’ Educational Association scheme. As such, it provided a springboard for further education elsewhere. “For a young woman to visit one of these schools often means the beginning of beginnings. It is the opening of a door to other things. It draws a curtain aside from all the trivial things that surround a working woman’s life,” as one of Newnham’s summer school attendees reports.

Another letter back to Newnham, written by M. Kiernan’s in 1942, reveals that for her, Newnham was a place of dreams. It inspired self-education and aspirations for future generations:

“Upon my return home [from the Summer School] I went to the Public Library and submitted the list of books I had brought back with me, imagine my surprise to find they didn’t have one! (...). I got my husband interested in books of that description so that now we are regulars in the non-fiction department whereas we used to avoid it like the plague. I am afraid our W.E.A. came to an abrupt end when our baby daughter was born (March 17 ‘39). All my real troubles started then [illness, financial hardship]. (...) there is nothing we would like better than for her to go to Cambridge. Is there any way in which she could go?”

Kiernan’s letter exposes the limits of the summer school. She had to return to a life of continuing toil and lack of opportunities and it is likely that her daughter didn’t go to Newnham.

Reading in the archive, we find that these courses were not purely educational. They also functioned as a holiday away from hardship and oppression, a short recuperation to enable return to normal, working life with newly won strength and endurance. One participant wrote: “One can only have a vague idea what a holiday like this means to a working woman, who has to turn out to help to support the home, and attend to her children as best she can.”

The great potential of Newnham’s Summer Schools for Working Women lies not in the fact that they produced revolutionaries or enacted radical social change—this, unlike other worker’s summer schools, was not their aim. Rather, they took their working students seriously as intellectual subjects capable of self-development and autonomy, both in their learning and in their decision of what to do with the learned. We do find the rare Newnham academic who was patronising and steeped in classist prejudices. One for example referred to her courses in English Literature which she gave to both married and unmarried working women, as “the Housewife’s Course.” Another academic wrote in a working woman’s progress report: “Although she is keen and obviously interested I doubt if she is capable of the concentration necessary to tackle and understand mistakes she has been making all her life” (possibly 1950, for a course on Written and Spoken English).

But this is not representative of the overall pedagogical project. The archive speaks of great flexibility on the side of the instructors to adapt their curricula in order to reach the students. The 1928 summer school for example studied poets based at Cambridge. Excursions were held to see these poets’ portraits at the Fitzwilliam Museum or to walk the grounds the poets themselves would have walked. Such pedagogical innovation no doubt brought the material to life for students unacquainted with academic work. Newnham’s summer schools for working women were revolutionary not in the political ends they might or might not have contributed to, but in their approach to pedagogy. Florence Smith, a summer school student in 1936, recalls how impressed she was at the unusual readiness of the teacher

"to work with us in the direction of relating our knowledge of literature to life in general, and our own lives in particular, and [to encourage us] to reveal the thoughts which her beautiful reading of different passages in the book called up in our minds. Our tongues were soon loosed in such a congenial atmosphere.”