Virginia Woolf is an important and generative figure in feminist thought and activism. While she never studied at Newnham, she had significant ties to our college. 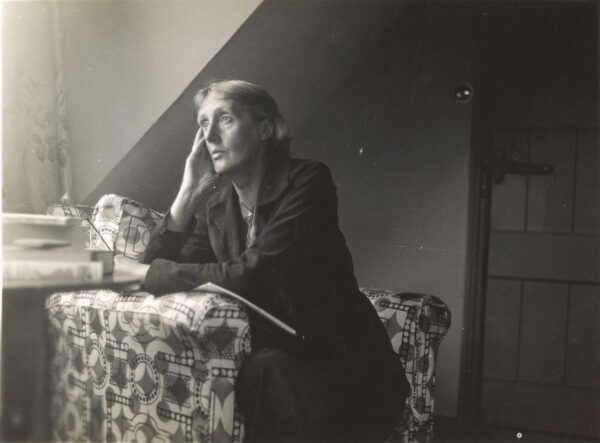 Virginia Woolf’s cousin, Katherine Stephen, was the librarian and later principal at Newnham College. Woolf’s A Room of One’s Own was based on two papers given to the Arts Society, Newnham, on the 20th October 1928 and the Odtaa at Girton College. Odtaa was a literary society, the name an acronym for One Damned Thing After Another. Woolf describes college gardens and hall of the fictional Fernham College in A Room of One’s Own. This is quite obviously modelled on Newnham and quite glorious too:

‘the gardens...lay before me in the spring twilight, wild and open and in the long grass, sprinkled and carelessly flung were the daffodils and bluebells, not orderly perhaps at the best of times, and now wind blown and waving as they tugged at their roots.

The windows of the building, curved like ships windows among the generous waves of red brick, changed from lemon to silver under the flight of the quick spring clouds.’

Cambridge and A Room of One’s Own

Woolf was astutely aware of the patriarchal nature of Cambridge University in the late 1920s and the way that women were barred from knowledge. In A Room of One’s Own Woolf she describes wanting to go and see a manuscript of William Thackaray’s novel The History of Henry Esmond in a Cambridge college library.  She stood ‘at the door which leads to the library itself. I must have opened it for instantly there issued, like a guardian angel barring the way with a flutter of black gown instead of white wings, a deprecating silvery kindly gentleman, who regretted in a low voice as he waved me back that ladies are only admitted to the library if accompanied by a Fellow of the College or furnished with a letter of introduction.’

At another time she describes being lost in thought while sitting on the banks of the river Cam. Excited by her ‘wash and tumult’ of thoughts. She found ‘it impossible to sit still.’ Thus she walked ‘with extreme rapidity across a grass plot. Instantly a man’s figure rose to intercept me. Not did I at first understand that the gesticulations of a curious-looking object in a cut-away coat and evening shirt were aimed at me. His face expressed horror and indignation. Instinct rather than reason came to my help; he was a Beadle [similar to a Porter], I was a woman.This was the turf; there was the path. Only the fellows and scholars are allowed here; the gravel is the place for me.’ [1] By the end of this encounter, Woolf loses her train of thought, and so shows that restricting women physically also restricts them intellectually. 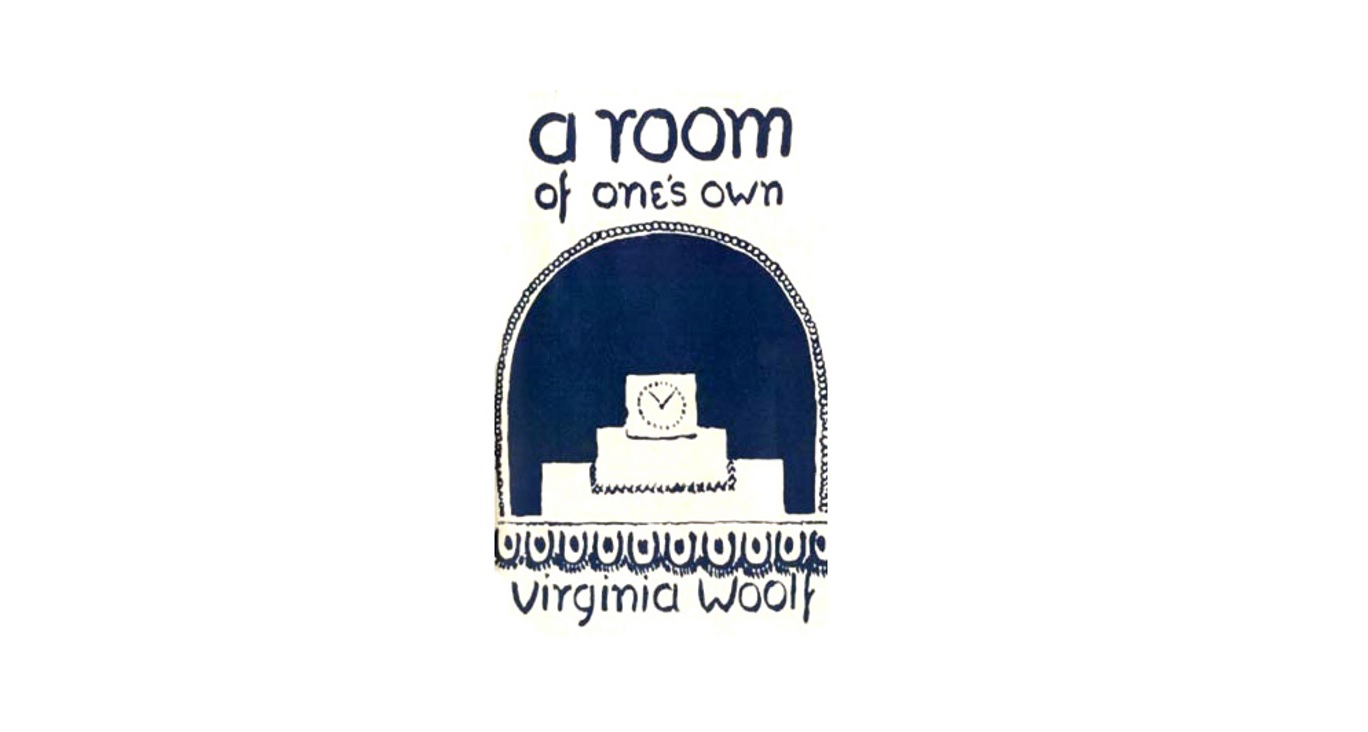 When Woolf addressed Newnham students at the Arts Society, she discussed the consequences to the lack of spaces for women to learn, write and their lack of  access to knowledge, or write. Poet and Newnham undergraduate E.E. Phare wrote a review of Woolf’s talk in the Newnham student magazine Thersities. Phare highlighted that for Woolf ‘the reasons why women novelists were for so long so few were largely a question of domestic architecture; it was not, and is not so easy to compose in a parlour,’ where women could very easily be interrupted. Woolf also ‘exhorted her audience to write novels and send them to be considered by the Hogarth Press, which she had founded with her husband Leonard Woolf in 1917. If Newnham students were to submit work, they should not try to adapt themselves to the prevailing literary standards which are likely to be masculine, but… should remake the language so it becomes a more fluid thing and capable of delicate use.’ [2]

Woolf made a big impression on students at Newnham and Girton. One student recalled the visit and the look Woolf fixed her with, which ‘held the hint of a smile, a hint of compassion, but it was above all an absolutely ruthless look; my pretty frock was no proof against it.’ To Girton, Woolf bought her lover Vita Sackville West with her. Some students, including the poet Kathleen Raine, were profoundly affected by this. Raine wrote ‘[They] were the two most beautiful women I had ever seen. I saw their beauty and their fame entirely removed from what is called “real” life, as if they had descended like goddesses from Olympus, to reascend when at the end of the evening they vanished from our sight.’ [3] For some audience members, Woolf and Sackville-West represented queer aspirations. They were unusually brave and public about their same-sex desires. But, as literary critic Jane Marcus writes, ‘this open flaunting of queer sensibilities has a certain chic upper class daring about it, not available as personal style to many of the young women in the room.’[4]

…And is rude about the food

Class difference is present too, when Woolf visits Newnham. She stayed for dinner in Clough Hall, arrived late, and disrupted the seating plan when she brought an unannounced guest (her husband  Leonard Woolf) with her. Woolf memorably described Newnham’s food in her Room of One’s Own:

'Everybody was assembled in the big dining room. Dinner was ready. Here was the soup. It was a plain gravy soup… Next came beef with its attendant greens and potatoes… suggesting the rumps of cattle in a muddy market, and sprouts curled and yellowed at the edge. Prunes and custard followed. And if anyone complains that prunes... are an uncharitable vegetable...stingy as a miser’s heart...he should reflect that there are people whose charity embraces even the prune.’

There was, Woolf recalls, no wine.

‘Biscuits and cheese came next, and here the water-jug was liberally passed round, for it is the nature of biscuits to be dry and these were biscuits to the core. That was all. The meal was over.’

Though Woolf’s discussion of the food seems a little rude, that wasn’t really her intention. It was to show that Newnham wasn’t wealthy. As she writes later, Newnham wasn’t founded on ‘treasure in huge sacks’, donors were not forthcoming and it was a struggle to get the necessary funds together to found the college and so: ‘Obviously [we] cannot have wine and partridges and servants carrying tin dishes on their heads.’ While Woolf’s unforgiving description of the food was perhaps meant ‘to evoke pity for the poverty of women’s colleges’, as Thersities contributor E.E. Phare notes, nevertheless ‘ it made us, her hosts, decidedly uncomfortable.’ [4] Woolf’s words certainly reveal the way that pity is often tainted with snobbery, though she did, according to the letters of her sister Vanessa Bell, give a flaming account of the Newnhamites, their charm, beauty and intelligence.

In an unexpected twist, the archive reveals that Newnham students took Woolf’s comments about food to heart. In the 1930 Roll Letter, students wrote that in A Room of One Woolf suggests that ‘art breeds art.’ Therefore, ‘In the hopes that a good omelette is likely to lead not only to a good lyric, but a good essay we have instituted a kitchen committee which, in safeguarding our digestions, helps us to combine high thinking with pleasant rather than plain living.’ [5]

Virginia Woolf espoused many anti-sexist, provocative ideas and challenged norms through her writing and in her life but she was ambivalent about feminism. During the Women’s Liberation Movement of the 1960s and 1970s, writers such as Virginia Woolf and Sylvia Plath played an important and generative role in the production of new writing by feminists and women, and so we include her here.

[3] Kathleen Raine quoted in Jane Marcus, Virginia Woolf, Cambridge and a Room of One’s Own: The Proper Upkeep of Names. (Bloomsbury Heritage Series, 1996).