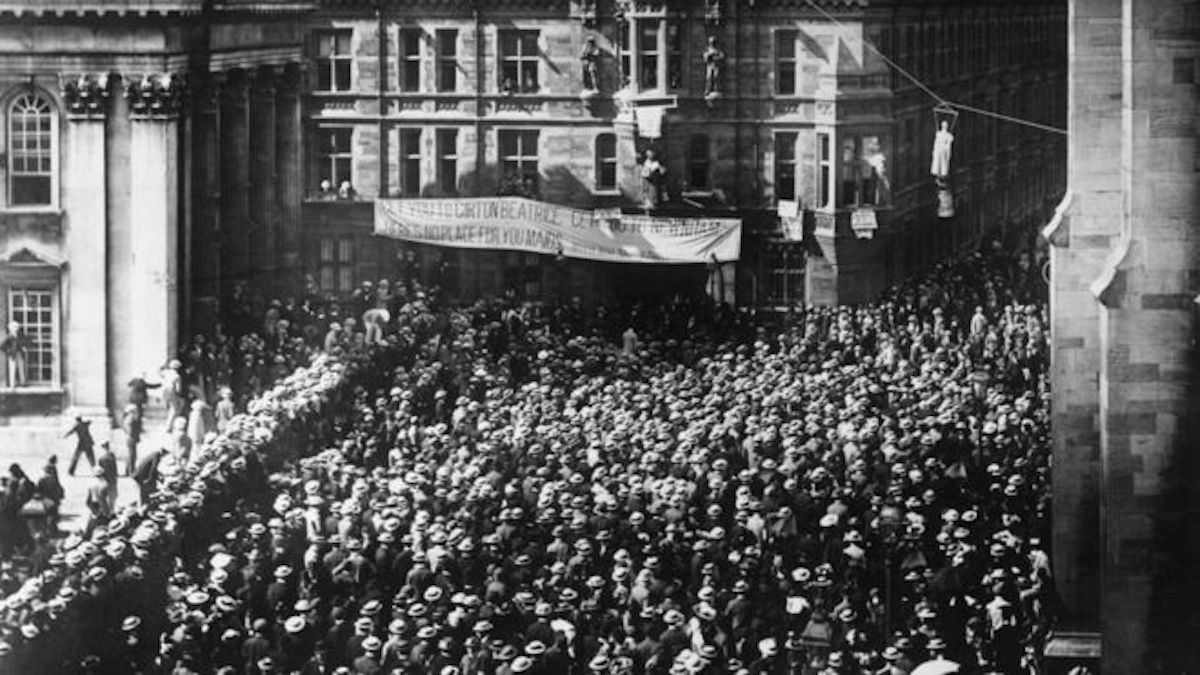 The Campaign for Women's Education

In a way, the entirety of Newnham College can be thought of as a project of feminist activism. It simultaneously provided, and powerfully advocated for, women’s education.

Perhaps framing the history of our college in this way might seem to be overstating the importance of Newnham. But, in 1869 the men of Cambridge and Oxford dominated British politics and the positions of political leadership, even more than they do now. What went on at these universities was of national concern and could have significant national impact. The founding of Newnham College should be regarded as a radical event with national importance.

Prior to the 1860s, there was no way for women to participate in higher education in Britain, women were not admitted to universities and the schooling they received was second-rate to men’s education. Alice Gardner reflects on this in her Short History of Newnham: ‘the course of a girl who had inward longings for intellectual culture was often hard; and harder still was that of young women who had a liking for literature and art, combined with a distaste for unvaried domestic interests or social routine.’ [1] Jane Harrison, the brilliant classicist who studied at Newnham and who was the first woman in England to have an academic career, described her experience: As a little girl she was absorbed in studies of Greek when a favourite aunt remarked ‘I do not see how Greek grammar is to help Jane keep house when she has a home of her own.’ [2]

The idea of Newnham

The idea of Newnham was put into words in the winter of 1869, at a meeting held at the home of Professor Henry Fawcett and Milicent Fawcett (later to be a campaigner for women’s suffrage). Milicent Fawcett ‘sat on a little stool by the fireside, next to her husband, in order to give an informal air to the proceedings.’ Attendees discussed Professor Henry Sidgwick’s scheme to establish a programme of ‘Lectures for Ladies’ in Cambridge.’ Milicent Fawcett noted  that ‘if we had said we wished to establish a college for women in Cambridge we might as well have said that we wished to establish a college for women in saturn. It was an absolute necessity to proceed with great caution.’ Sidgwick’s  lectures for ladies first took place, not on the grounds that we now know as Newnham, but in a house off Trumpington Street. Women could attend lectures on: classics, mathematics, moral sciences (then the name for philosophy) and natural sciences. By the end of Lent Term 1870, between 70 and 80 students were attending. 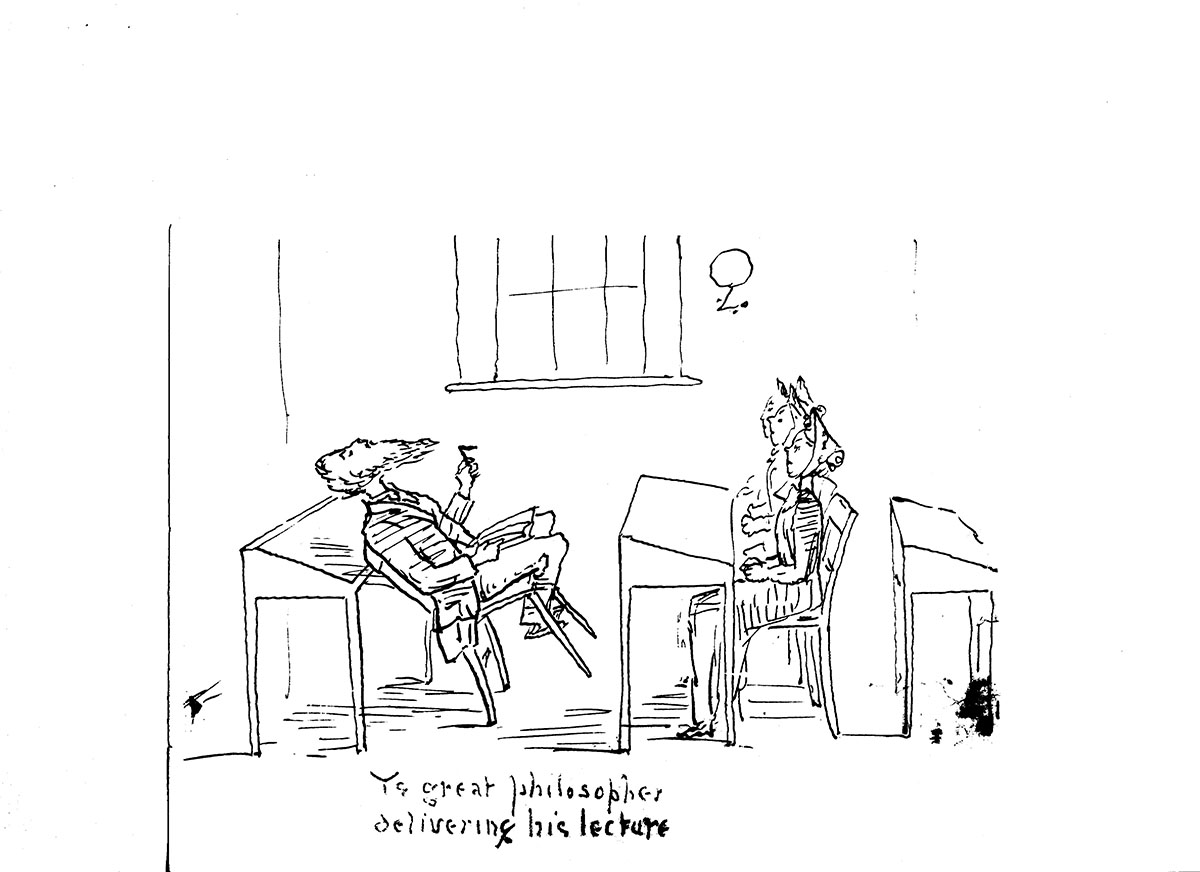 The founders of Newnham College were adamant that women should be educated to a high degree and the lecturers employed ‘should be…engaged in lecturing on the same subject in their respective colleges.’ This would ensure a sound education for the women students, but would also be affordable for both lecturers and students as the ‘lecturers could afford to redeliver a course of lectures for a smaller remuneration than if they had to prepare their lectures endlessly for the women’s classes.’ There was no accommodation offered in 1870, and the ‘immediate object of these lectures would be to afford means of higher education to women residing in Cambridge.’ If women from elsewhere wanted to attend lectures, ‘they would be required to reside either with their friends or in some lodging or hall.’ The North Hall Diary, a fascinating record of our college’s early history, which is anonymously written by different authors, gives a good indication of the way that a woman’s reputation was at stake if she sought education, and the necessity to retain ‘respectability.’ As historian Rita McWilliams Tulberg discusses, this is because in the 19th Century white British ‘middle-class women were assigned the virtues of piety, absolute purity…their lives were to be ones of patience and resignation.’ Therefore, in order for these lectures to go ahead, those who organised them had to get the approval of ladies and gentlemen who resided in Cambridge. Their respectable names would reassure the parents of prospective students of the ‘femininess of the undertaking.’

In 1871, five students and Miss Anne Jemima Clough who had previously run her own school for girls in the Lake District, moved into a house on Regent Street. One of the first students, M. Paley Marshall, recalled that ‘Miss Clough was rather inclined to treat us like school girls,’ though there was some rebellion from herself and fellow students who, on one occasion, did not seek permission before spending the day in Ely. These original students were greatly pushed for space, they each had a small bedroom,shared two common rooms, one of which served as a study in the day and a dining room in the evening and another which served as a sitting-room where the lectures were given,  Parker’s Piece. They had ‘little elbow room, no games, a scanty library…and very little of what is now considered necessary freedom in work and play.’ The houses that Newnham students lived in before 1875 changed and expanded to different sites across Cambridge, until in 1875 Newnham Hall was built in what was then the countryside. Sheep appear in pictures taken at the time. Alice Gardner recalls being asked by Anne Jemima Clough to chase cows from the garden. Agitation for degrees and the first vote

During the late 1870s, women students were informally admitted to attend lectures at other Colleges, often chaperoned by Miss Clough and were granted permission to read in the University Library, but to do so they needed letters of reference from men who were not associated with the university. Women were able to sit examinations only at the discretion of each examiner.This changed in 1881 when a vote was taken in the University’s senate which gave women the right to take exams along with male students.

Next, women campaigned for University, rather than just College degree certificates. In 1887, this was defeated in a Senate House vote. Some men made the argument that were women to be granted degrees they would soon be agitating for a share in the wealth and privileges of the University, as well as the right to vote. While these arguments often lacked an explanation  why women should not be given responsibilities at University, they frequently rested on a sense that women’s minds were inferior to men’s and that education, government, and the workings of the university were a decidedly masculine matter. Admitting women would only lower standards and distract male students. Some academics disagreed. Having women in lectures was  ‘Not an inconvenience’, as an academic teaching history stated.‘Perhaps [there are] some advantages, as the class of women who take up history is relatively better than the class of men who take the same subject on the whole.’

In 1897, campaigners tried again to get degrees for women and were bitterly, and quite brutally, defeated. On May 21st, there was another vote about whether women should get degrees. As many of those with voting rights didn’t live in Cambridge, special trains were scheduled. ‘Excited undergraduates in fliers’ carriages drawn by a horse, met those who travelled to Cambridge at the station and raced at break-neck speed along Regent Street, through the market place, to Senate House. There, amongst a crowd of thousands of mostly men, banners were unfurled from Gonville and Caius College. The one pictured below reads: ‘Get you to Girton, Get you to Newnham. Here’s no place for you maids.’

An effigy of a woman student in blue bloomers was suspended from the windows of what is now the Cambridge University Press bookshop and it ‘evoked a roar of laughter’ from the crowd. 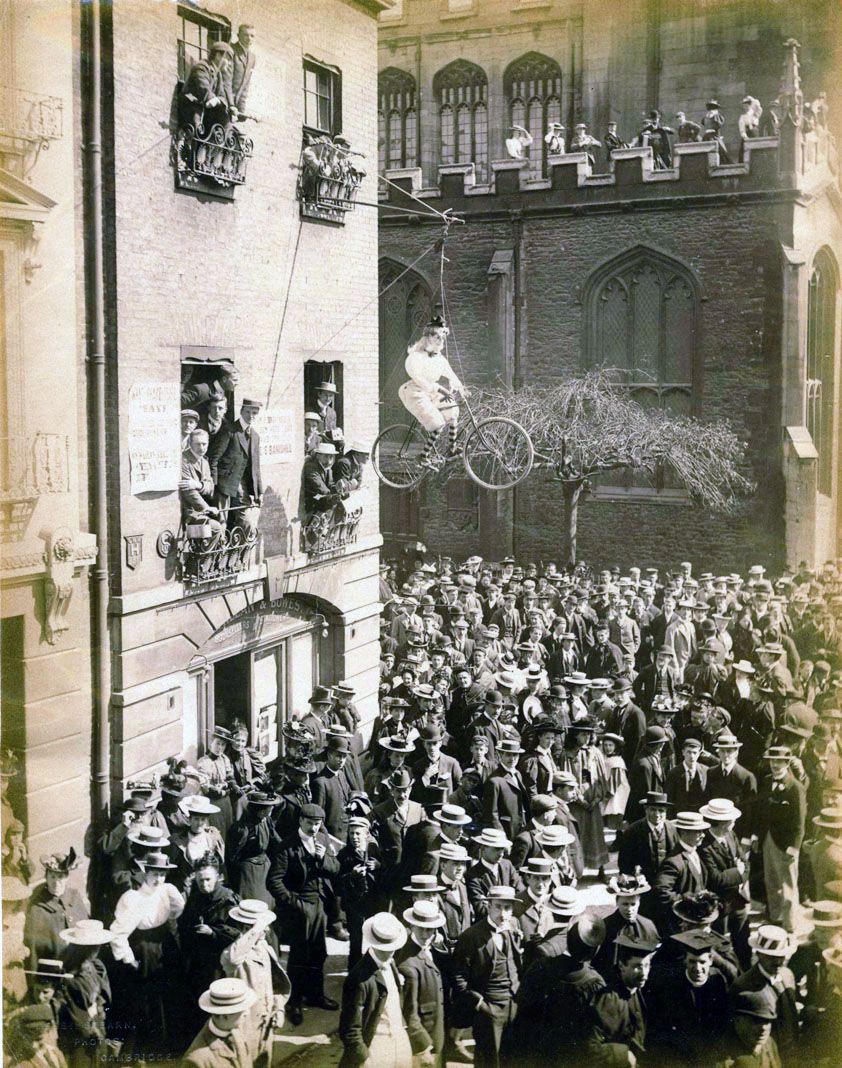 Finally, the vote was announced: 1,712 against and 662 for granting women degrees. Undergraduates began their celebrations by running down to Newnham. A Newnham student recalled, in a letter to the Principal in 1951, that she could hear the roar of the attacking force increasing as they approached. The angry mob was fortunately held  back by Newnham’s gates and by some more sensible male academics who appealed to the protestors ‘gentlemanly sensibilities.’ Unsatisfied, belligerent undergraduates returned to the marketplace for a night of destructive celebration. They started a huge bonfire in the market square, raided shops for doors, shutters and fencing to burn and threw firecrackers haphazardly in bundles through the windows of houses around the square.

The second vote and the charging of Newnham’s gates

On Thursday 20th 1921, another vote was taken. Campaigners felt that the time was right.  At Oxford, women had been granted the right to degrees in 1920, during the First World War many women had participated in war work, and some women were granted the right to vote in 1918. Nevertheless, old and tired arguments about the inadequacy of women’s intellect and their desire to interfere with men’s education were once again drawn from the rag-bag of misogyny, examined, polished and displayed. Undergraduates gathered outside senate house once again chanting ‘We won’t have women’ and bribed the local children with handfuls of coppers to do the same. A motion for women’s right to get degrees was once again defeated. Triumphant undergraduates raced to Newnham. They used a handcart as a battering ram and smashed Newnham’s cast iron gates. 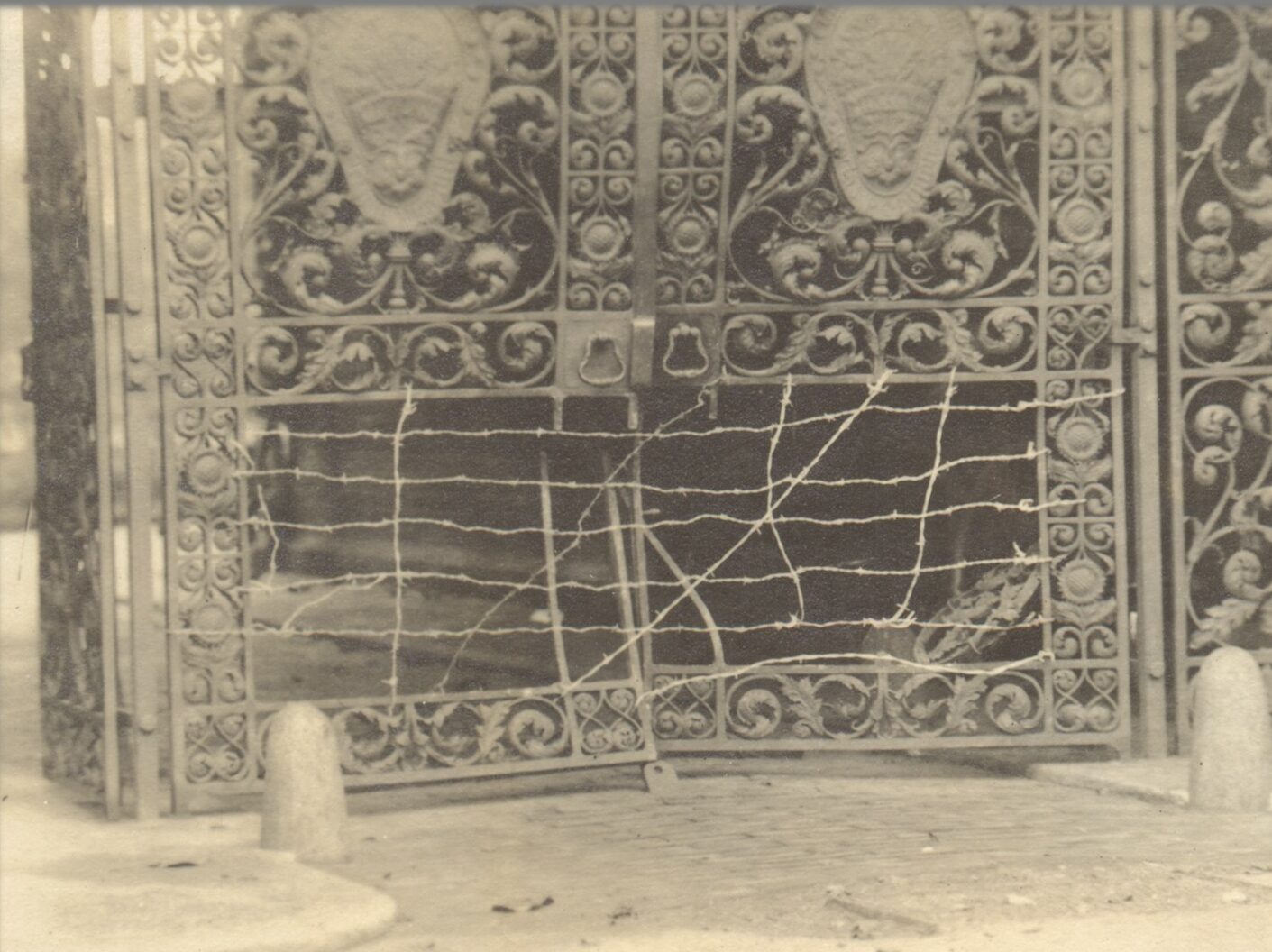 In 1947, women were finally granted degrees. The successful Senate House vote, however, was still not without drama. As Newnham student Myra Curtis who was inside Senate House when results were announced, recalls: ‘A slight tremor passed over the assembly, like wind over a cornfield, and the thing was over. In the future, our visits to Senate House…would be as of right and duty.’ Women’s admission to the University was capped at 20% of the number of men and while the women’s colleges Newnham and Girton could and did expand, women were, in the 1960s, still only eligible for around 12% of undergraduate places. In 1972, three men’s colleges began to admit women, Kings, Churchill and Clare. But, even in this period, known for the women’s liberation movement, some male students were not happy. One Clare alumnus sent his rowing blazer back to College with a letter that suggested he was “shocked” and “appalled” at the recent decision to include women. In 1982 and 1988 when women were admitted to St Johns and Magdalene college respectively, the college flags were flown at half mast and some male students wore black armbands.

Newnham’s history is one of agitation based on a belief that women are as intelligent and intellectually capable as men. For Anne Jemima Clough, Millicent Fawcett, and Henry Sidgwick it was clear from the very beginning that women were just as capable, and so just deserving as men, of an education of the highest standard.

[10] Sophie Caldicott, Strippers, coffins, and black arm bands: how Cambridge reacted to the admission of female students, The Tab.