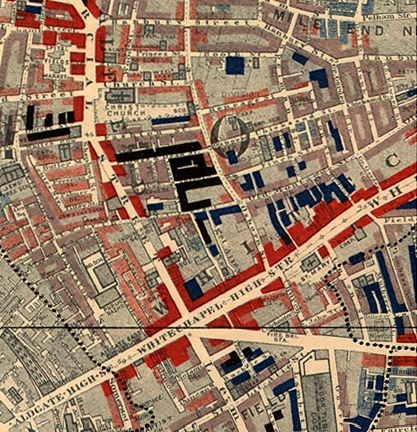 From 1887 onwards, Newnham’s university settlement at Nelson Square in Southwark served as a community centre for London’s poor and provided an opportunity for members of Newnham College to learn about social reality in ways otherwise unavailable to them.

Members of Newnham College, chiefly among them Alice Gruner, had reached out to Girton and the women’s colleges of Oxford to found the “Women’s University Association for Work in the poorer districts of London” (Newnham’s Roll Letter 1888). This association was part of the settlement movement, based on the idea that middle class people (settlers) would live among the working poor as moral and intellectual guiding exemplars, rather than provide mere financial support through charity work. 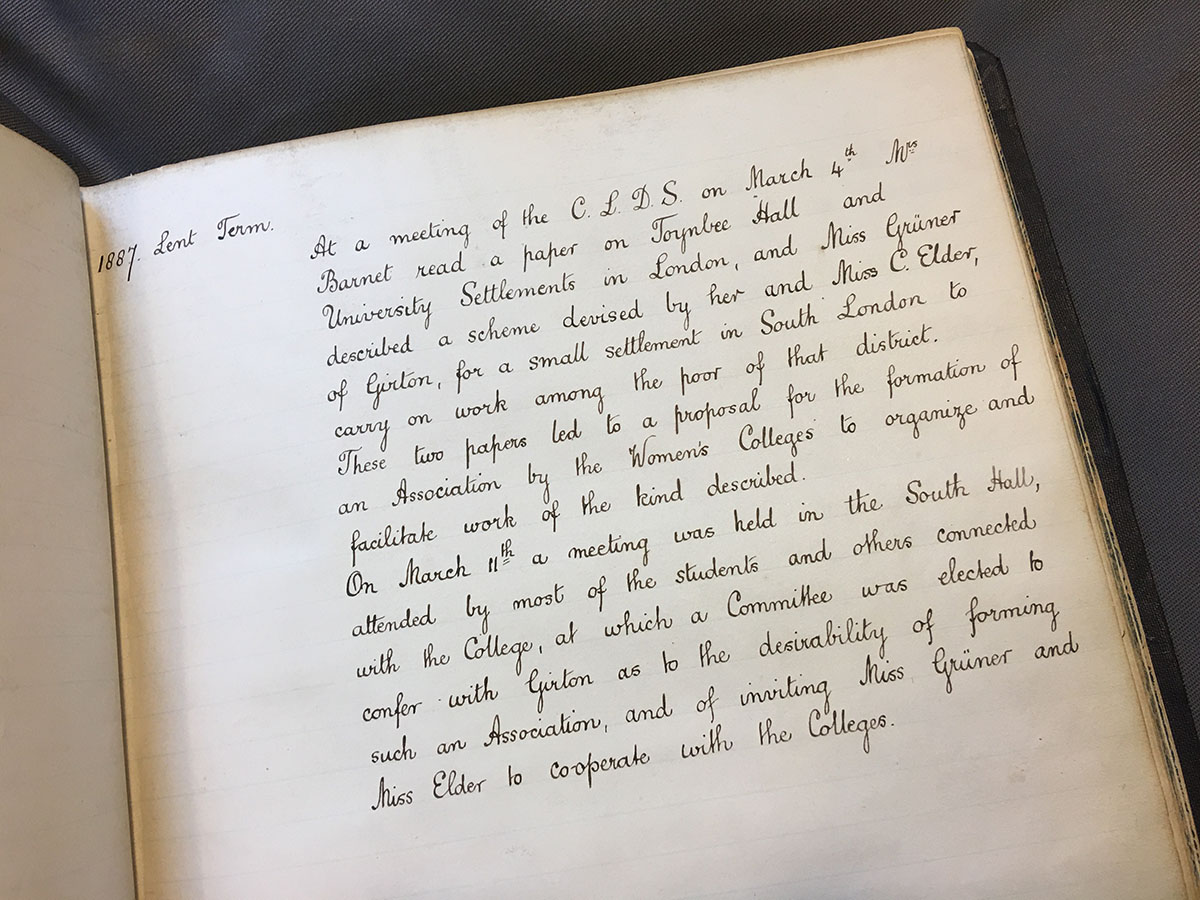 “The primary notion of a settlement”, writes Alice Gardner in A Short History of Newnham in 1921, “was of an abode in the poorer districts of a town where men of culture, engaged in various occupations, might make their home, devoting their leisure to the society and to the amusement or assistance of poorer neighbours.” What is interesting, and admirable, about these settlements is that they are completely unlike Victorian philanthropy. The settlement movement’s aim was to establish a community between working and educated classes, a bridge between two classes that otherwise lead separate lives, largely ignorant of one another, as historian Gertrude Himmelfarb notes. As Lucy Hartely writes in her study of one such settlement–Toynbee Hall–, it constituted an “active involvement [with the poor] rather than passive charity.”

Toynbee Hall was named after Oxford historian Arnold Toynbee. It opened in Whitechapel in 1884 as an educational and community centre for its working class neighbourhood. Unique among other settlements founded at the time was its close association with universities. It was manned mostly by Oxford students, who came down during the long vacation to do voluntary work in Whitechapel. Toynbee Hall–generally modelled on an Oxford college with dining hall, library, classrooms, and student rooms–offered educational and recreational activities to the working poor in the neighbourhood.

The Newnham-lead Women’s University Association was inspired by Toynbee Hall and opened their own settlement at 44, Nelson Square, Blackfriars Road, in Southwark. This location was known for its poverty: It was marked most darkly in Sir C. Booth’s poverty map. The Women’s settlement was planned as having three to five residents at any one time, who lived there temporarily for the summer, or for a period of up to ten months. At the settlement, the residents were encouraged to continue their academic work next to the voluntary work for the local community. This way, they could set the best example of diligence and work ethic for the poor of the neighbourhood. Activities organised by the settlement on Nelson Square in the early days included a tennis club, swimming lessons, games and entertainment for children, a library club, a part-singing club, needlework class, a bible lesson, and excursions to London Museums.

Settlements of this sort spread: to other cities in the UK and overseas to America and Europe. Starting in Vienna, Jewish ‘Toynbee Halls’ were established in Austria, Germany, and Romania to spread Jewish culture and knowledge to the Jewish working classes. Historian David Rechter has unearthed this forgotten piece of Jewish history. He writes that “the prosperous and educated [Jews of Vienna] would devote a few hours of their time to those less fortunate and less educated in order to fortify them morally and spiritually for the struggle of the following day.” Jewish Toynbee Halls offered a “mixture of accessible lectures, musical and literary performances, children’s entertainment, adult-education courses, and food,” Rechter found.

“whole streets ... given over to the hangers-on of a vicious population, people whose conduct was brutal, whose ideal was idleness, whose habits were disgusting.... Robberies, assaults, and fights in the streets were frequent” (quoted in Rechter 2019, 53).

Settlers seem to have thought of themselves as primarily tackling a problem of moral poverty. Samuel Barnett writes: Toynbee Hall means to create “a community (…) where there is no more hunger and misery, because there is no more ignorance and sin,” (Barnett quoted in Hartley 2019, 283). Similar ideas reigned at the Women’s University Association at Southwark: Mrs. Alfred Marshall, chair at Women’s University Settlement AGM in 1888 declared that the aim of Settlement work is “to raise character rather than to diminish suffering.” For anarchist Emma Goldberg, this solution to the poverty problem is absurd; it amounts to little more than “teaching the poor [and starving] to eat with a fork” (quoted in Rechter 2019, 55).

The language of the ‘settlement’ further invokes colonialism. Might we find its local form as objectionable as its global cousin? Indeed, this connection is not far-fetched. As historian Lucy Hartley has pointed out, the Barnett’s went on a world tour in 1890/91 to learn about the lives of the poor in other countries, India chiefly among them, so as to improve their own work at Toynbee Hall in Whitechapel.

An asymmetry between powerful colonisers and subjected colonised characterises projects of global settlement. The settlement movement recognised the dangers and problems with such asymmetry and aimed to do better at the local level. Arnold Toynbee for example emphasised the need for a community of equals between educated and working classes in a lecture shortly before his death in 1883:

“We - the middle classes, I mean, not merely the very rich - we have neglected you; instead of justice we have offered you charity, and instead of sympathy, we have offered you hard and unreal advice; but I think we are changing. If you would only believe it and trust us, I think that many of us would spend our lives in your service. You have - I say it clearly and advisedly - you have to forgive us, for we have wronged you; we have sinned against you grievously - not knowing always; but still we have sinned, and let us confess it; but if you will forgive us - nay, whether you will forgive us or not - we will serve you, we will devote our lives to your service, and we cannot do more” (quoted in Himmelfarb 1990, 374)

The work of Toynbee Hall reflected its patron’s aspirations in serving the local poor. They were invited to shape the Hall’s programme and frequently held their own trade union or strike committee meetings there, as Himmelfarb documents.

Reading recollections from members of Toynbee Hall or the Women’s University Settlement at Nelson Square, another aspect of their work gains prominence. These institutions solved an epistemic problem: that the educated were ignorant about the social conditions of the working classes.

Samuel Barnett states the dual aim of Toynbee Hall accordingly: “to provide education and the means of recreation and enjoyment for the people in the poorer districts of London and other great cities; [as well as] to enquire into the condition of the poor and to consider and advance plans calculated to promote their welfare” (quoted in Hartley 2019, 282). Jane Addams of the settlement Hull House in Chicago even gives the epistemic aim more weight when she states that Hull House was “more for the people who do it than for the other class” (quoted in Himmelfarb 1990, 380). This epistemic aim bore famous fruits in the UK: economist William Beveridge and Labour politician Clement Attlee both underwent their political education at Toynbee Hall (pictured below). 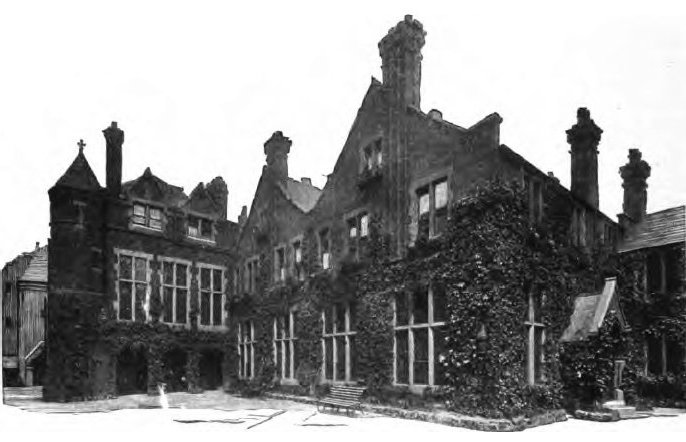 The epistemic aim of the settlement was especially important for women, who were just starting to enter public political life. The Women’s University Settlement held regular meetings in Newnham at North Hall to inform students about its work and the social conditions in Southwark. Newnham student newspapers reported on the settlement, as did Newnham’s yearly Roll Letter. Unfortunately, the archive speaks little about Newnham students actually going down to London in the early days and living in the settlement. Yet, we know that in the 1950s Newnham gave out a “Pfeiffer Scholarship” for a woman “engaged in training for the profession of Social Worker” to live in the settlement for 40 weeks. As the advertisement states, “Residence in a Settlement is recognised as one of the most useful ways of obtaining experience of social conditions in an urban neighbourhood.”