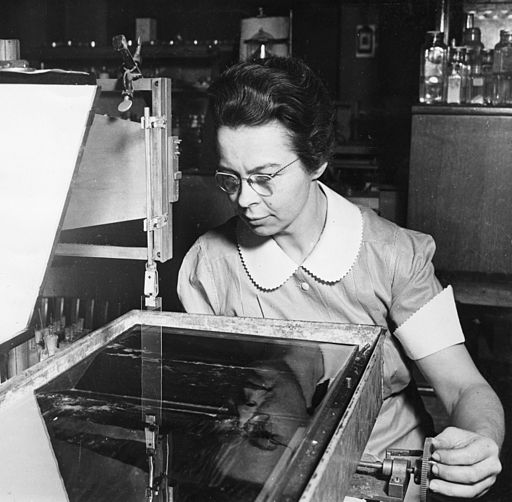 was the first woman to be awarded a PhD in Physics from the University of Cambridge in 1926, and then the first woman scientist to be employed by General Electrics. Before she came to Cambridge she won acclaim for her research at the University of Chicago in 1918 which arguably helped saved lives as she worked on charcoal filtering applications that would become essential in gas masks in the World Wars.

While at Newnham, Katharine undertook her doctoral research at Sir Ernest Ruthford’s Cavendish Laboratory, looking at the electrons in mercury vapour. During her time at this laboratory she made significant breakthroughs in smoke screening technologies, which would allow less oil to be used as it was vapourised – making smoke screening more effective during the Second World War.

An anti-reflective coating she worked on is still named the Langmuir-Blodgett film to recognize her contribution to its development. The Langmuir-Blodgett film deposition process allows molecules to be deposited in a single layer across a solid surface, a major breakthrough in film deposition processes still in wide use in manufacturing applications today.

Katharine’s life and work underpins the profound impact of world events on research and vice versa during turbulent and unsettling times, succeeding in spite of established gender norms in the scientific world and striding out for generations of physicists and women to come. Katharine would have been 124 years old on 10th January 2022.